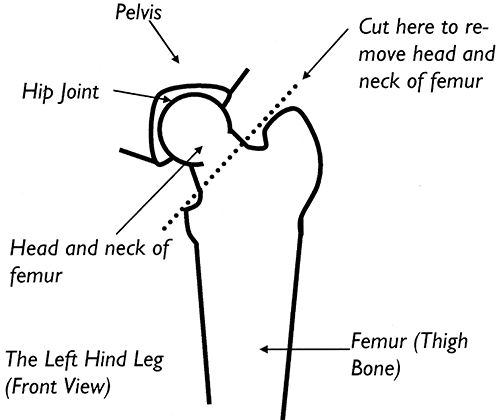 Femoral Head and Neck Excision involves removing the end of the femur that forms the hip joint. A scar tissue joint forms where the femur previously contacted the pelvis. Since the joint is gone, the joint pain is gone. The removal of the end of the femur is permanent and only performed when hip replacement or corrective hip surgery are not possible. Arthritis is the most common indication for removing the head and neck of the femur. Arthritis may be caused by hip dysplasia, dislocated hip, and fractures. Hip dysplasia means poor hip joint conformation allowing too much movement of the head of the femur against the pelvis. Over time, hip dysplasia results in painful arthritis of the hip. Hip dislocation ofter recurs after repositioning unless additional surgery is performed.

It is better to remove the end of the femur than to allow the hip to remain out of place. Fractures of the head or neck of the femur or fractures of the pelvis at the hip joint can be treated by femoral head and neck excision when fracture repair is not an option. The surgery is also the primary treatment for Legg-Calve-Perthes disease. In growing, small breed dogs, this disease deforms cartilage and creates dead bone at the end of the femur. Preoperative radiographs are important to evaluate the hip and determine appropriate options for treatment.

After surgery, the leg is slightly shorter and the gait a little different. Smaller pets have less obvious changes in their gait. Unlike other surgeries, pets are encouraged to stand and walk on the operated leg immediately after surgery. At 2 weeks, pets usually have started to put the foot on the ground. By 3 weeks, pets put weight on the leg. At 1 month, pets are comfortable using the leg. Femoral head and neck excision successful and economical for relieving hip pain in both large and small dogs as well as cats.